Alan Mulally took an old failing company and restored it to its former glory.  The company with a scarred brand and aged business model was losing 16 billion dollars a year. That’s 50 million a day, 365 days a year!  The company was no other than Ford Motor Company. His focus on teamwork and accountability created a new company culture. This new culture focused on positive leadership with a vision toward moving forward. This, in turn, drove results. Source: https://www.entrepreneur.com/article/242302

In this article, you will see 5 important measures that brought the company back from the brink. These measures that worked so well for Ford also work on projects. Without these measures, there is a strong possibility that your project will fail.

Who is Alan Mulally?

He spent almost 40 years at Boeing first as a lead designer and then as the general manager for the 777. The 777 plane is a very intricate machine with over 3 million parts and a global supply chain. The 777 has been the subject of documentaries, articles and case studies. While the 777 project was very impressive it was not Mulally`s greatest achievement. It was when he saved Ford, the world’s largest car manufacturer from bankruptcy.

Mulally is a leader with a method that works, especially when applied to big projects. Whether it is building a new generation of airliners, or transforming a large company. His approach begins with understanding the problem and how it came about. Then the goal is to determine what to do about it. Source: https://www.kornferry.com/institute/alan-mulally-man-who-saved-ford

Mulally created the “One Approach”. The “One Ford” approach also inspired Steve Ballmer to launch the “One Microsoft” plan.

Alan Mulally joined Ford Motor Company in 2006 as president and chief executive. This was when as the country stood on the brink of a recession. This would bring that would bring the American auto industry to its knees. With Mulally at the helm, Ford managed to weather the storm and return to profitability. This was all achieved within a few short years. He retired from Ford in 2014.  Source: http://www.foxbusiness.com/features/2012/04/19/business-leaders-fords-alan-mulally.html. 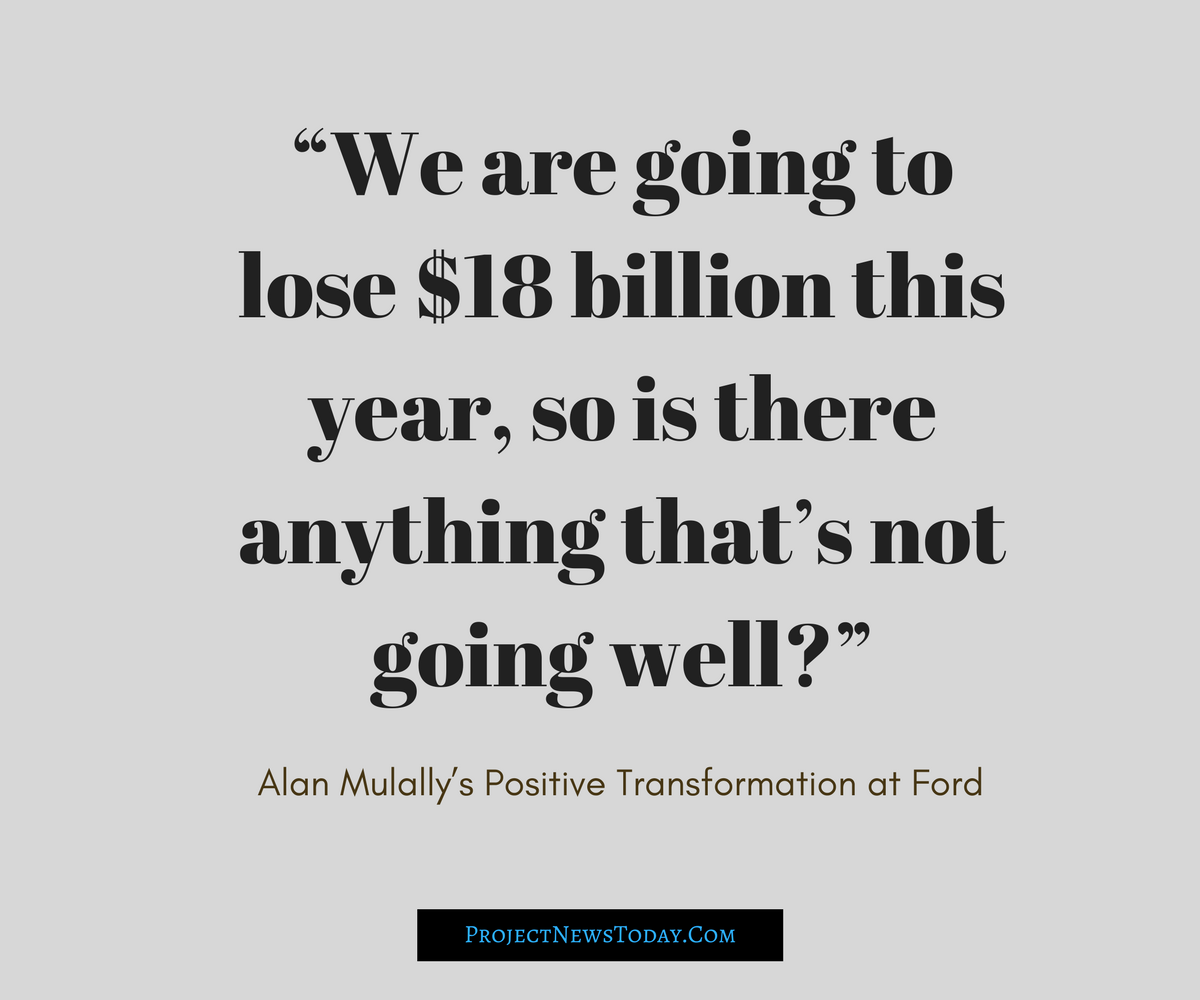 In old established companies, the main problem may be the culture itself. This is especially true if the culture is one of Fear. Culture can be so old and undisputed for decades, that no one has the courage to challenge or change it. Mulally entered into a company were no one admitted things were wrong. Everything was always “on schedule”, and was “ok”, right until the deadline when all hell broke loose. Everyone was afraid to admit they had issues. Industry observers said, Ford had a “dysfunctional culture of infighting, backstabbing and excuses.” Source: https://www.leadershipnow.com/leadershop/9780307886057.html

When the first executive had the courage to admit that a new vehicle launch would be delayed, instead of firing him (as everyone assumed), Mulally began clapping and said, “… that is great visibility… what can we do to help you out?”. From this point, confidence bloomed, communication flowed and collaboration grew. Source: https://www.brookings.edu/blog/education-plus-development/2016/06/28/alan-mulally-ford-and-the-6cs/

How To Apply “You have a problem” to Your Project

Study the company in every aspect and don’t be afraid to appeal to other professionals in your line of work. You can’t be an expert in everything.

Mulally had been studying Ford well before his first day on the job. Part of this was interviewing dozens of Ford insiders, including the board. He also interviewed professionals from the automobile industry, finance, business and consulting. Mulally created summaries of all these interviews and put them in a thick set of binders, which he kept in his office. He used the insights contained in these books, plus his own expertise to write Ford’s plan. Source: https://www.kornferry.com/institute/alan-mulally-man-who-saved-ford 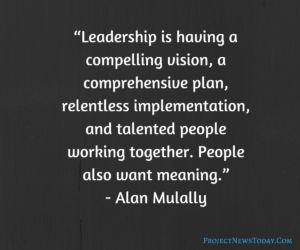 Vision alone is insufficient. You must “pull everybody together around a strategy to implement that compelling vision,” Mulally said. “Have a really clear plan for delivering it, one with really clear performance metrics so that everybody knows what they are doing. That way, in the areas where you’re not on plan, everybody can work together. That’s about the relentless of implementation.”

“When you run into an issue, trust the process,” Mulally said. “Share them with everybody. Then, collectively, you’re going to find a way to fix them.”

How To Apply “Vision, Focus and Plan” to Your Project

Most people are aware of the need to have a clear project plan yet it is also important to have vision and focus. As the project manager, you are likely to have a bigger picture view than most on the project. Make sure you share and make the team aware of why they are doing a particular task. Showing someone how the task that they are doing links to the benefits of the project is a huge motivator. Also showing what the focus should be will help give the project team clarity on what they should be working on. A great way to do this is to have regular sessions with the project team. In each session outline what is complete and what is next to do.

You should start by asking yourself, is the current company structure make economic sense?

Mulally found that Ford was bleeding money due to the way it ran it’s overseas operations. There were four different regions—The Americas, Europe, Australia and Asia Pacific. Each had their own separate vehicles for each market. This was despite them being for the same demographic. The result was they all produced almost identical cars. Source: http://www.mainlandford.com/blog/the-way-forward/

Mulally restructured the organization by integrating the regions and functions. He made each business unit accountable for their own operations. Some key functions moved and managed from one place. This whole process had the brand “One Ford”.  It also helped de-bureaucratize the whole company, reducing costs and focus on innovation.

How To Apply “Make Things Simple” to Your Project

Mulally’s leadership style is conveying the idea that there is always a way forward. He says a critical part is “reinforcing the idea that everyone is included.” When people feel accountable and included, it is more fun. It is more rewarding to do things in a supportive environment.” http://fortune.com/2016/03/21/negative-positive-leadership-politics-ford-alan-mulally/

Under Mulally`s leadership, Ford established an approach called “Working Together”. This is encouraging people to meet face to face, share ideas, resolve conflicts and build trust. This, in turn, helps to develop a shared understanding about what they are trying to achieve.

Mulally further instilled teamwork by being open and accessible to all employees. He would often stop by and sit in on meetings for a little while. His willingness to listen was effective at motivating employees for their top performance.

Mulally reframed meetings from negative to positive. He fostered a safe environment where people had open and honest discussions. Mulally encouraged collaborative approaches to problem-solving. This is instead of attacking executives for the issues they brought to the table. Source: http://fortune.com/2016/03/21/negative-positive-leadership-politics-ford-alan-mulally/

How To Apply “Positive Leadership” To Your Project

Mulally closed down many dealerships along with selling off Aston Martin and Volvo. He also reduced Ford’s stake in Mazda. He started focusing on one car only: the Ford Focus. Concentrating on innovation and revamping car designs.

Alan Mulally went back to how Ford’s founder Henry Ford imagined the company. To build a great and affordable car which anyone could afford. Mulally introduced in an affordable car with voice navigation and Bluetooth connectivity. This used to only be available only in premium car models. Source: https://www.cnet.com/roadshow/news/alan-mulally-the-ceo-who-mortgaged-fords-legacy-for-techs-sake/

By 2010, the company was reporting a pre-tax operating profit of $8.3 billion. Within four years of joining, Mulally had Ford profitable again. This is one of the greatest turnarounds in history. All done without accepting any bailout money from the government.

This particularly applies to projects that have been ongoing for a while and have lost their way. This is often due to scope creep (the original list of work has increased). Instead of stopping the project go back to what the project first set out to achieve. This can get a project going again. By refocussing the scope and cutting out the extra parts can bring a project back on track.

There are many more secrets to Alan Mulally`s success at Ford. These are 5 essential things that you must apply to you project:

Most people are aware of the need to have a clear project plan yet it is also important to have vision and focus. Showing someone how the task that they are doing links to the benefits of the project is a huge motivator. Also showing what the focus should be will help give the project team clarity on what they should be working on.

An easy way to make things simple on your project right at the start is making sure the scope is clear. During the delivery of the project it is a good idea to break the project down into easy to understand small parts.

This particularly applies to projects that have been ongoing for a while and have lost their way. Instead of stopping the project go back to what the project first set out to achieve. This can get a project going again.