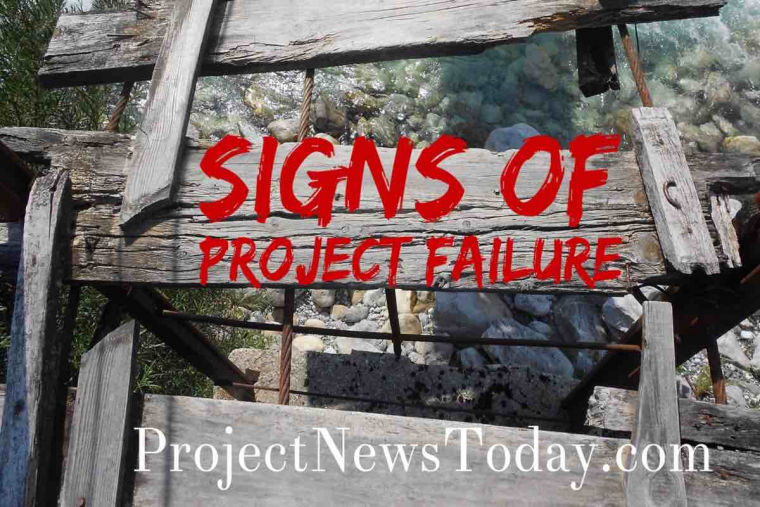 This week I have a guest post for you by Amit Patel who started https://crushthepmexam.com/ as an online resource dedicated to helping professionals pass their PMP Exams on their first try.

In any serious pursuit, professional or personal, it will usually take several failures before your first success. With time and experience, the likelihood of failure wanes, but it is always there. This applies to any major undertaking, especially in the realm of project management. Even with the best intentions and the brightest teams, projects can fail. In these situations, the best thing to do is identify what mistakes were made, pick up the pieces, and start again.

There are some common warning signs to look out for when a project is on the verge of failure. Properly identifying these issues will allow you to prepare for the inevitable crash and burn when it comes, or in some cases successfully avoid the failure by fixing these issues in the nick of time. These are some general indicators that a project is heading toward disaster, with some real-life examples to help illustrate what they look like.

As the number of individuals involved in a project grows, the need for proper communication increases as well. There are few projects larger than those concerning civic construction, such as the case of the Jacques Cartier Champlain Bridge construction project. An overpass that was demolished and rebuilt only a year prior needed to be demolished and rebuilt yet again after construction on the bridge had completed. This was due to the fact that the bridge itself was also undergoing renovations at the same time, and the finished road across the bridge was no longer aligned with the finished overpass. Poor communication between the workers on both projects was the cause of this.

All of these issues can be identified and resolved with proper communication, meaning that their existence as a problem is a result of poor communication, and is a harbinger for eventual project failure.

It’s important to factor in your budget when undergoing any project. Every decision should be made with the ramifications it has on the overall cost of the project considered. However, this doesn’t mean the budget should be a primary motivator. Reducing costs on a project is ideal, but this cannot be the overall goal in and of itself. Consider the now infamous water crisis in Flint, Michigan: in an effort to save money, their primary source of water was diverted from Lake Huron to the significantly more contaminated Flint River. This resulted in discoloration, bacterial infection, and the introduction of lead and iron in the water from pipes in poor condition.

The saddest aspect of the Flint water crisis is that the team working on that project prioritized cutting costs to such a degree that they completely disregarded their original goal, which was supplying the citizens with clean water. This is a dangerous error to make, and one you should take great pains to avoid. If any project you are involved in becomes focused more on cutting costs than anything else, to the point where that is the first aspect of any decision that is considered, you are in danger of losing your primary goal, and project failure will inevitably follow.

Risk management is one of the central tenets of proper project management, with a great deal of theory behind it. Understanding the best ways to minimize risk and mitigate the consequences of something going wrong are instrumental to determining the success of any project. Even when success seems to be the most likely outcome, like in the case of Target’s failed expansion into Canada. Target was a very popular brand in Canada, with many Canadians crossing the border into America to shop at their stores. For this reason, Target was confident that their planned business venture into Canada would be an overwhelming success.

Due to not exercising proper risk management, Target Canada netted losses of around $2 billion, on top of the $4 billion they spent on the initial expansion that was lost when they filed for bankruptcy. Target expanded far too fast, opening over 120 stores in a very short span of time. With any significantly sized project or undertaking, incremental growth is the best way to identify potential risks and mitigate them before making further progress, which is the opposite of how Target went about this business venture. Failing to offer the same low prices and availability of their products, Target Canada failed to live up to the needs of Canadian shoppers, and business was poor as a result.

Hindsight is 20/20, as the saying goes. It’s very easy to point out where other companies have failed in their projects; it’s much more difficult to identify points of failure in your own. What these stories of projects gone bad tell us is how simple oversights can cause catastrophic effects on an overall project. Failure is an inevitability in business, with many successful ventures coming about in the wake of several devastating defeats. However, ensuring communication is solid, utilizing proper risk management, and avoiding shifting all of the focus on reducing costs can go a long way toward ensuring the success of your projects.