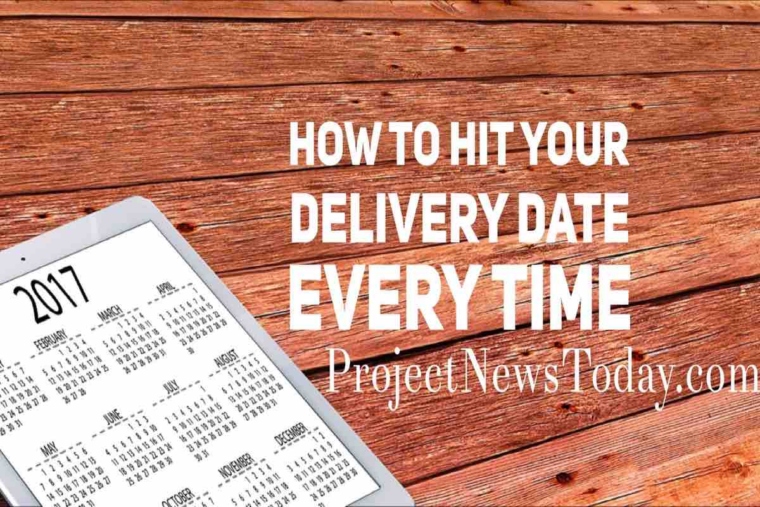 Running your own project can be both very rewarding while at the same time being very frustrating. Picture the scene; there you are at the start of a brand new exciting project, assembled around the table is the best project team members you could have hoped for. You then spend a very productive few hour crafting a fantastic project plan, and everyone is confident that all the dates are achievable. You all leave the room very excited about the future of this great project.

Then three weeks later one of your project team members comes up to you.

“We have a problem. That task that we thought would take 4 days…. well after we started work we have realised it is likely to take 5 days.”

You look at your plan and realise that the next task is due to start straight after this first task. You don’t want to go back to your boss and explain that you are already one day behind and the project has only just started. It is not going to look good and put the pressure on the rest of the project. Suddenly this fun exciting project does not look like as much fun anymore.

Well, what you should have done was in the planning room with your team before the project started. This stop gap approach that you could take is what I use to increase my chances of delivering projects on time.

All Projects Have Problems Expect the Unexpected

It is guaranteed that your project like every other will run into difficulty at some point, as they all do. A great example of a famous project that went well and was considered an amazing success was the London 2012 Olympics. This enormous project successfully delivered on time resulting in a fantastic Olympic games but what about a major problem that the project faced four years earlier.

To the sound of cheers, it was announced on 6th July 2005 that London would host the 2012 Olympics. Straight away the ambitious project started with a definite completion date that had to be hit. The project was well planned, had plenty of resources and enough money. Then in 2008, the global financial crisis happened which nobody expected, and suddenly private developers for the Olympic village had to withdraw.

However, the project was refinanced with government backing, and the project moved on. The project was a great success even with this and other problems. What this proves is that even with all their money and resources they hit problems, so the chances are so will you. The hard cold facts are projects run into problems, what sorts the good project managers out from the not so good ones is the ability to recover from these problems.

There are many reasons why projects run into problems from poor estimation or planning through to lack of resources and time. The reality is you never know what or when something will happen that will derail your project. The best thing you can do is give yourself the time and breathing space to resolve problems and put the project back on track. The best way to do this is to apply the stop-gap approach to make sure your project hits its delivery date.

Make Time in Your Plan

It is well known that there is a high probability that tasks take longer than initially estimated due to poor estimating, optimistic outlook and the unexpected suddenly happening. To allow for one or more of these situations, it is good practice to factor in a 20% tolerance to all tasks. The difficulty is to go through each task on a plan could take a very long time particularly on projects which have hundreds if not thousands of tasks.

There is a way to add 20% to every task instantaneously. If your project runs through a typical working week, then you have five days of project time per week, Monday through to Friday. Each of the days is 20% of the total week. Monday 20% + Tuesday 20% + Wednesday 20% + Thursday 20% + Friday 20% = 100%. Therefore if you make one of the project days a non-working day, then you will have added in 20% to every week of the plan. The trick is to still do work on this day but not include it in the plan that way if there are not any problems it is an opportunity to get ahead of the task.

For example, say a project task takes eight days to complete. You set Friday as a non-working day and produce your plan. Therefore when planning, you will plan as follows:

As you can see from the example this task that was due to take eight days is planned to take ten days. This gives you two days to resolve any problems or take the opportunity to get ahead of schedule and finish early.

The way to do this easily goes into whatever project planning software you are using and simply set Friday to a non-working day. Your project software will then automatically reschedule the plan adding 20% to every week (based on a 5-day working plan).

How to do the Stop Gap Approach

Here is a quick demonstration that shows how quick and easy it is to implement this technique in seconds so your project can also have the stop gap approach in your project. For this example, I have used Microsoft Project but no matter what project planning tool you easy it is easy to do on most of them.

I have set up a simple project with six tasks and as you can see each task is 20 days worth of work. Each task follows on from the task before it. In the example, we are due to finish the project on 21st April but the risk is any delay to any of the tasks will result in the project being late. As a project manager, you will lose credibility if one day you are communicating a completion date and then the next day stating it will actually be later than that date.

You need to give yourself breathing space in case any of the tasks hit any problems. As we have established in the previous chapter the way to quickly and easily do this is by setting one of the working days to a non-working day.

As you can see by doing this the completion date is pushed back by a month. This simple change gives your project breathing space so any problems can be resolved and the project has a higher chance of being delivered within the timescale promised to the project sponsor.

What we have learnt

It is inevitable that projects will run into problems and tasks will take longer than originally estimated. It is important as a project manager that you maintain credibility throughout the lifecycle of the project. One of the fastest ways to lose credibility is kept going back to the project sponsor and move the project completion date back.

By applying the stop-gap approach of switching one of the days to a non-working day, this gives you 20% contingency every week. This breathing space gives you a chance to resolve any problems that may arise and still hit the completion date.

So give the stop gap approach a go and let me know how you get on. I will love to hear from you if you have tried this in other project planning software and how easy you found it.

Would you like to get your projects off to a great start? If so you can get a free project start up the template by following this link.